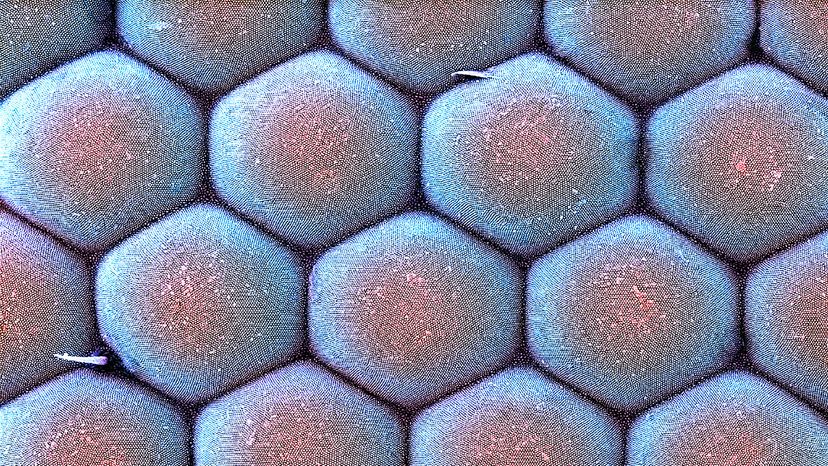 If you’ve ever tried checking Google Maps while walking down a sidewalk on a bright day, you already know how difficult it can be to read a mobile device screen in bright sunlight. That happens because the light reflects off the screen, wiping out the contrast that your eyes need.

But now, those troubles with screen washout may be fading. That’s thanks to a new anti-reflection film developed by a team of researchers led by inventor Shin-Tson Wu, a professor of optics at the University of Central Florida. (Wu is a prolific inventor who holds 81 patents, according to his page in the Florida Inventors Hall of Fame website.)

“These two images show the moth-eye-like nanostructures, from above (left) and from the side (right), which researchers say can help reduce glare on screens.Shin-Tson Wu, College of Optics and Photonics, University of Central Florida

In order to make phone screens more readable, the researchers turned to an intriguing inspiration in nature. The eyes of moths are covered with anti-reflective nanostructures that allow the insects to see in the dark, while also preventing light from reflecting off their eyes and possibly alerting predators. The scientists then devised a fabrication technique that uses self-assembled nanospheres to form a template that can be used to create a structure similar to that of moth’s eyes in a coating. Then they fine-tuned the structures’ design, relying on a computer model that simulated the coating’s optical performance.

"Using our flexible anti-reflection film on smartphones and tablets will make the screen bright and sharp, even when viewed outside," said Wu in a press release. "In addition to exhibiting low reflection, our nature-inspired film is also scratch resistant and self-cleaning, which would protect touch screens from dust and fingerprints."

The researchers’ work is described in deep scientific detail in the journal Optica, a publication of the Optical Society, a professional organization for scientists, engineers and students.

The practice of imitating models in nature to create better forms and processes is called biomimicry.

Why do I need an electrical adapter when I travel overseas?

Why does beer form a head but soda doesn’t?

Flintstones , Frightening and Fragmented: Our Best Stories You Might Have Missed This Week

Are humans really descended from apes?